Studies show how nutritional deficiencies can decrease conception success, and during pregnancy and early infancy, may lead to damages that are irreversible beyond certain critical points in development 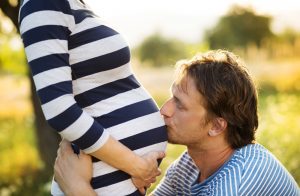 In fact, the “Barker Hypothesis,” also known as the “The Fetal Origins Hypothesis,” theorizes that certain adult-onset diseases originate from nutritional deficiencies during the perinatal period (during pregnancy or in early infancy). These damages are irreversible beyond certain critical points in development, even following full nutrient repletion. For example, prenatal vitamin D deficiency has been correlated to later-onset diseases such as Multiple Sclerosis (MS), Type 1 Diabetes, Preeclampsia, Schizophrenia, and other cognitive function and learning disabilities.
Below are just a few of the key nutrients important to having a healthy pregnancy and baby.

From Pre-Conception to a Healthy Baby, Your Reproductive System Needs Vitamin D

Vitamin D is necessary for all stages of the life-cycle. Numerous studies have found that higher vitamin D levels during pregnancy reduce the risk of adverse maternal and infant outcomes. Vitamin D has also been shown to be involved in the process of conception, implantation and the development of the placenta.

Study of couples by Tartagni et al., with previous infertility and undergoing fertility treatments, found a 3 times higher chance of pregnancy for couples when the male had a vitamin D level of 30 ng/ml or higher. The pregnancy rate per patient and per cycle as well as delivery rate per patient and per cycle were all significantly higher among the couples whose male partner had a higher vitamin D level compared to the lower vitamin D. Another study by Jukic et al. found that the probability of conception taking longer than 6 months was 71% lower when the woman’s vitamin D level was less than 20 ng/ml compared to at least 50 ng/ml.

In an analysis of 10 different studies on vitamin D and miscarriage, Tamblyn et al. found that, compared to women whose vitamin D levels were sufficient (at least 30 ng/ml) at the beginning of pregnancy, women who were vitamin D deficient (below 20 ng/ml) had a 94% significantly increased risk of miscarriage, and women who were either deficient or insufficient had a 60% significantly increased risk of miscarriage.  The authors concluded that “Vitamin D deficiency and insufficiency are associated with miscarriage.”

Vitamin D levels in the range of 40-60 ng/ml (100-150 nmol/L) are especially protective during pregnancy, and have been shown to reduce complications including preterm birth, hypertensive disorders of pregnancy (preeclampsia) and gestational diabetes. A GrassrootsHealth publication by McDonnell et al. demonstrated how women with vitamin D levels at or above 40 ng/ml (100 nmol/L) had a 62% lower risk of preterm birth compared to women with levels less than 20 ng/ml.  Higher vitamin D levels in pregnancy have even been associated with a lower risk of cesarean section and lower labor pain scores! 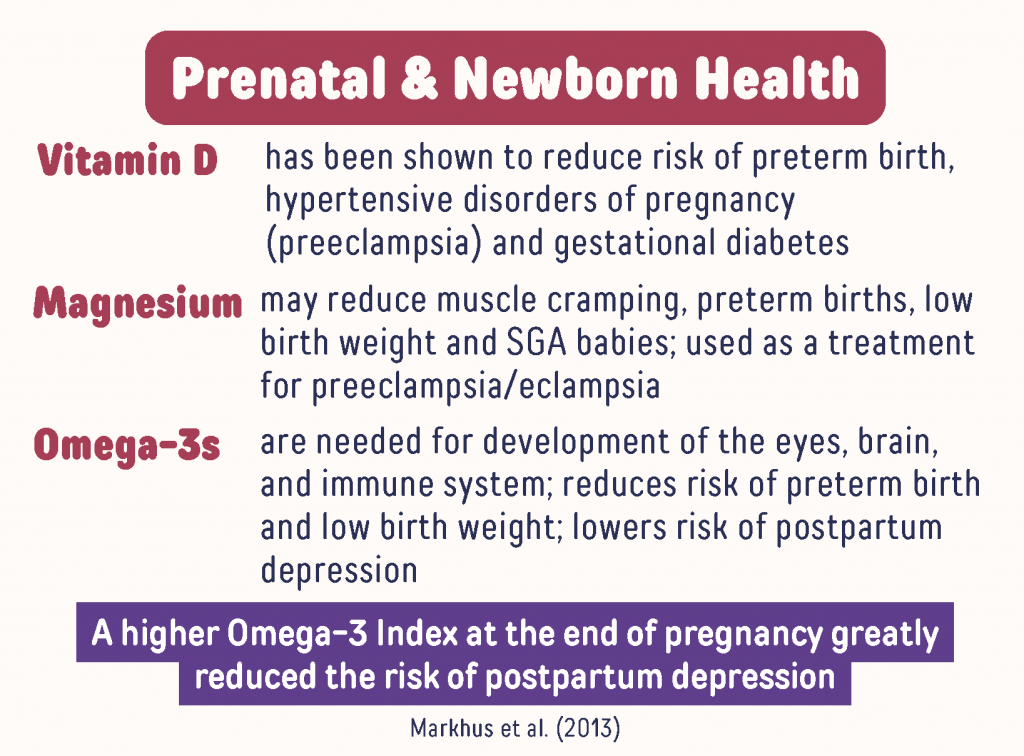 Omega-3s and Magnesium are Also Important for a Healthy Pregnancy

In fact, Omega-3 fatty acids are so important to the health of the pregnancy and baby, the Australian Government, Department of Health officially made the recommendation for daily supplementation with omega-3 long-chain polyunsaturated fatty acids (800 mg docosahexaenoic acid [DHA] and 100 mg eicosapentaenoic acid [EPA]) for all pregnant moms!

Several studies demonstrate the importance of omega-3s for pregnancy, such as a study by Carlson et al., in which a higher intake of EPA and DHA resulted in an approximate decrease of 70% for early preterm birth, 85% for very low birth weight, and 60% for low birth weight. Markhus et al. showed that a higher Omega-3 Index at the end of pregnancy greatly reduced the risk of postpartum depression, and when combining data from 9 different randomized controlled trials on omega-3 supplementation and preterm birth, Kar et al. found a 58% lower risk of early preterm birth among those taking omega-3 supplements. Omega-3s are also important to the healthy development of the baby’s brain, eyes, nervous system, and even their immune system, among others.

Magnesium is also important to a healthy pregnancy, and getting enough magnesium has been shown to help ameliorate muscle cramping during pregnancy, decrease the frequency of preterm births, low birth weight and small for gestational age newborns, and used as a treatment for preeclampsia/eclampsia. Magnesium in pregnancy has also been associated with metabolic syndrome for the child later in life.

Toxic Elements to Avoid in Pregnancy

During pregnancy, toxic elements such as lead stored in bones can be released and passed from the mother’s body to the baby which may result in miscarriage, premature birth, low birth weight, learning or behavioral problems, or damage to the baby’s brain, kidneys, or nervous system. Cadmium is another toxic element that can also accumulate in the kidneys and thyroid gland, and can contribute to thyroid issues, kidney disease, infertility, uterine fibroids, and other reproductive tract diseases if the build-up is high enough.

Based on the findings presented above, measuring your levels of vitamin D, magnesium, and omega-3s may help determine if more of these nutrients might be needed to support a healthy pregnancy and baby.

Create your custom home blood spot kit with the following measurements to help determine if you are getting enough of the following nutrients shown to benefit your current or future prenatal health:

Don’t forget several other essential nutrients for reproductive health, including the below and many more

Having and maintaining healthy vitamin D levels and other nutrient levels can help improve your health and the health of your baby, now and for the future. Enroll and test your levels today, learn what steps to take to improve your status of vitamin D (see below) and other nutrients and blood markers, and take action! By enrolling in the GrassrootsHealth projects, you are not only contributing valuable information to everyone, you are also gaining knowledge about how you could improve your own health through measuring and tracking your nutrient status, and educating yourself on how to improve it.

The Importance of Vitamin D in Pregnancy