Special guest post by William B. Grant, PhD, a recognized “World Expert” in the top 0.1% of scholars writing about Sunlight over the past 10 years The evidence supporting the role of moderate sun exposure and vitamin D in supporting optimal health has increased tremendously during the past two decades. A study in Sweden found that women with the greatest sun exposure had half the rate of dying and an increased life expectancy of 2-3 years (Lindqvist, Epstein et al. 2014). GrassrootsHealth held a symposium in 2014 with the title Vitamin D for Public Health, publishing a paper to follow titled Sunlight and Vitamin D: Necessary for Public Health (Baggerly, Cuomo et al. 2015). A review of the risks and benefits of sun exposure published in 2016 concluded “The message of sun avoidance must be changed to acceptance of non-burning sun exposure sufficient to achieve serum 25(OH)D concentration of 30 ng/mL or higher in the sunny season and the general benefits of UV exposure beyond those of vitamin D.” (Hoel, Berwick et al. 2016). There is now convincing evidence that achieving vitamin D levels above 40 ng/ml (100 nmol/L) can greatly reduce the risk of many types of cancer and many other types of disease and increase life expectancy. In the U.S., mortality rates are about 25% higher in winter than in summer (Grant, Bhattoa et al. 2017). In 2018, Marc Sorenson and I published the book Embrace the Sun, (Sorenson and Grant 2018). It has 285 pages of text and 1224 references. Recently, a review was published with the provocative title Insufficient Sun Exposure Has Become a Real Public Health Problem (Alfredsson, Armstrong et al. 2020).

Vitamin D3 is produced through UVB radiation that reaches 7-dehydrocholesterol in the lower layer of skin, followed by a thermal reaction. Vitamin D3 travels through the blood to the liver, where it receives a hydroxyl group to become 25-hydroxyvitamin D3 [25(OH)D3], which is measured as one’s vitamin D level. 25(OH)D3 is converted to 1,25(OH)2D3 (calcitriol) in the kidneys and other organs and cells as needed. Calcitriol is the hormonal metabolite of vitamin D3, which affects many processes in the body either through affecting gene expression of approximately 10% of the human genome, or through effects with calcium. Sun exposure used to be considered a healthy thing to do. In the U.S., Coppertone used to advertise that applying their lotion led to a nice tan. When I was a child in Sacramento, California in the 1940s and early 1950s, I used to get sunburned and then develop a good tan every summer. I have not developed skin cancer, melanoma, or any internal cancer. But as evidence mounted that excess sun exposure was an important risk factor for skin cancer and as stronger sun screens were developed, people were urged to lather up before going into the sun and/or cover up. So by the late 1990s or early 2000s, people were letting less UVB penetrate the skin, which is unfortunate since sun exposure is the most important source of vitamin D for most people. Average vitamin D levels in the U.S. for the period 2007 to 2009 rose from 21 ng/ml in winter to 29 ng/ml in summer in the U.S. (Kroll, Bi et al. 2015). Nationwide surveys found that annual average vitamin D levels for those not taking vitamin D supplements remained within one ng/ml of 24 ng/ml from 1988-1994 to 2009-2010, while they increased from 27 ng/ml in the first period to 31 ng/ml in the second period for those taking vitamin D supplements (Schleicher, Sternberg et al. 2016). Dietary sources provide only about 300 IU/day of vitamin D in the U.S., not nearly enough to get blood levels up to the recommended 40-60 ng/ml (100-150 nmol/L). Supplements provide an increasing share of total vitamin D in the U.S.

Vitamin D can be produced efficiently only when the solar elevation angle is greater than 45 degrees. In other words, when your shadow is shorter than you are, you can make vitamin D. Dermatologists have a shadow rule which says to avoid sun exposure when your shadow is shorter than you are. Vitamin D proponents have a different shadow rule: spend more time in the sun when your shadow is shorter than you are. The solar elevation angle changes by season and by time of day. It is impossible to produce vitamin D at the latitude of Boston (42° N) for six months around the end of the year (Engelsen, 2010). The best time during the day is the 4-hour period around solar noon. Since it may be impossible to produce vitamin D from solar UVB exposure during some seasons, days, and times of day, indoor UVB exposure or vitamin D supplementation should also be considered with the goal of achieving a vitamin D level of 40-60 ng/ml (100-150 nmol/L).

The Risk of Improper Sun Exposure

The primary harm from sun exposure is development of skin cancer and melanoma. There will be an estimated 7,180 skin cancer deaths and 4,360 melanoma deaths in the U.S. in 2021 (Siegel, Miller et al. 2021). That is only 1.9% of all cancer deaths. Solar UVB exposure reduces risk of most types of cancer through production of vitamin D (Moukayed and Grant 2013). Cancer deaths are about 21% of all deaths in the U.S. Thus, skin cancer and melanoma deaths are 0.4% of all deaths. While not generally known, sun exposure also reduces risk of melanoma. A meta-analysis found that melanoma patients with lower vitamin D levels had a 55% higher mortality rate (Tsai, Kuo et al. 2020).

Skin pigmentation has adapted to where people live for many generations, dark in the tropical plains, brown in tropical forests, progressing to very light at high northern European latitudes (Jablonski and Chaplin 2010, Jablonski 2021). In the tropical plain regions, the dark skin protects against free radical production, skin cancer, and folate destruction while still permitting sufficient UVB to reach the 7-dehydroxyvitamin D layer to produce vitamin D. Outside the tropics in the northern hemisphere from the Middle East through northern Europe, skin has the ability to tan as solar UV exposure increases in spring and summer, resulting in about a four-fold reduction in UVB penetration. A problem in the U.S. is that inhabitants with northern European ancestry may have skin pigmentation slightly lighter than appropriate for where they live, while inhabitants with African ancestry may have skin pigmentation darker than appropriate. As a result, pale-skinned inhabitants are more prone to skin cancer while dark-skinned inhabitants are more prone to vitamin D deficiency (Ames, Grant et al. 2021).

Research Showing the Health Benefits of Sunshine and Vitamin D

It is noted that a common refrain in the medical journal literature is that the benefits of vitamin D have not been confirmed through randomized controlled trials (RCTs). RCTs are routinely used to evaluate proposed pharmaceutical drugs in terms of efficacy and adverse effects. Most vitamin D RCTs performed to date have been based on the guidelines for drugs. The basic assumption for drug RCTs is that the only source of the agent is the trial. Sun exposure, food, and supplements are important sources of vitamin D. In addition, most trials have enrolled people with relatively high baseline vitamin D level and have given relatively low vitamin D doses. Robert Heaney pointed out in 2014 that vitamin D supplementation is better studied using guidelines for nutrients (Heaney 2014). Thus, nutrient status would be measured and participants chosen with low concentrations, observational studies would be used to guide supplementation to achieve healthy levels, concentrations would be measured again, confounding factors would be adjusted so that only the nutrient of interest was the limiting factor, and outcomes would be based on nutrient status, not nutrient dose. A few researchers have adopted this approach, with GrassrootsHealth being among the leaders of this approach. They have demonstrated that vitamin D concentrations >40 ng/ml are appropriate for pregnant women to reduce risk of preterm delivery (McDonnell, Baggerly et al. 2017) and >60 ng/ml for breast cancer prevention (McDonnell, Baggerly et al. 2018).

With the limitations of RCTs to demonstrate the benefits of vitamin D, results from observational studies provide some of the strongest evidence, with support from geographical or temporal ecological studies (populations defined geographically used as the entities) and studies of mechanisms. Again, the medical literature tends to discount observational studies on the basis that they are associational studies that may be due to other factors. Case-control studies (vitamin D measured near time of diagnosis) generally find stronger benefits of higher vitamin D levels than prospective studies (vitamin D level measured from blood drawn at time of enrollment in a cohort study). Medical journal reviews often suggest that the disease may lower vitamin D level, especially near time of diagnosis. However, as reported in an article from GrassrootsHealth, acute inflammatory illness can lower vitamin D level, but the effect is very short lived (French, McDonnell et al. 2019). For breast cancer, the tumor can progress rapidly from undetectable to detectable very rapidly, so prospective studies generally do not find an effect of vitamin D. Getting Outside has Benefits beyond Sunshine Too

While reduced risk of disease and increased life expectancy are important benefits of sensible sun exposure, they are not the only benefits. One important additional benefit is exercise. It is easy to add a lunch-time stroll or a weekend in a park to one’s schedule. Going to a park or natural area also helps one get back to nature. I often visit a local park in San Francisco in the early afternoon and observe the birds then report the sightings to ebird.org operated by Cornell University’s Ornithology Lab. Thus, I can also participate in an important citizen science program.

Be Sure to Get Healthy Sun Exposure and Healthy Vitamin D Levels!

With almost 90% of the general population having vitamin D levels below the recommended 40-60 ng/ml (100-150 nmol/L), it is obvious that most people need more vitamin D. While most of us cannot achieve a vitamin D level of 40-60 ng/ml from sun alone, either due to our lifestyle, where we live, or other circumstances, we can certainly reach those levels with the right amount of supplementation. Ames, B. N., W. B. Grant and W. C. Willett (2021). “Does the High Prevalence of Vitamin D Deficiency in African Americans Contribute to Health Disparities?” Nutrients 13(2). 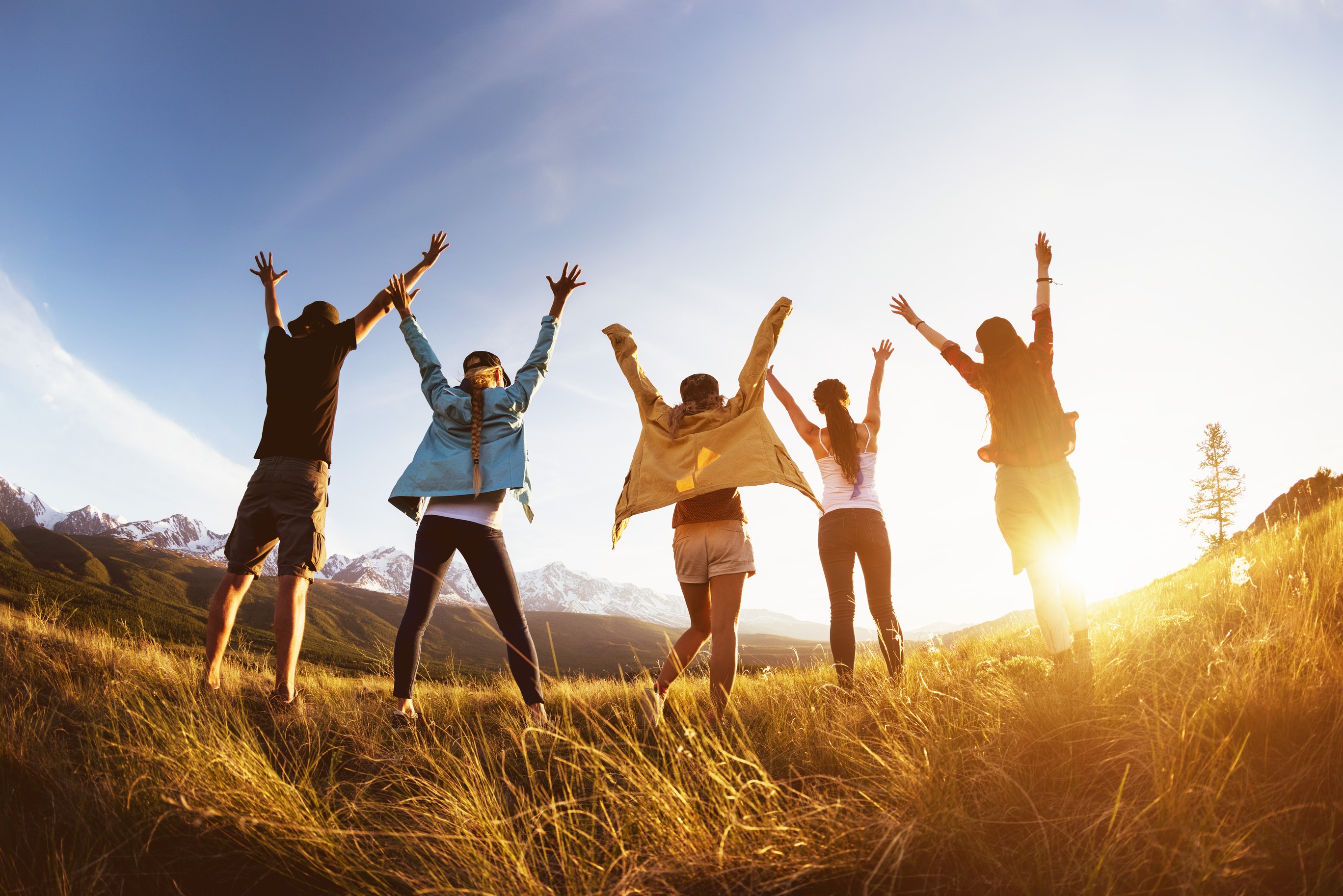